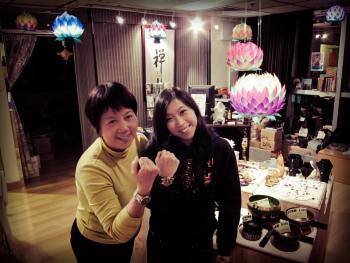 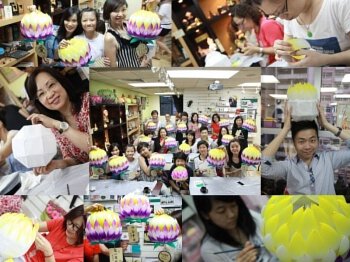 “I named the shop after my father, in a manner of speaking,” reflects Cynthia Hui. The founder and current Marketing Manager of Han Li (漢礼) watches me proudly as I admire the assorted yet remarkably uncluttered products for sale. Taken together as a package, Han Li’s merchandise represents the “aspirational” spiritual wayfarer of modern Asia: fresh, healthily skeptical of ritualistic attachment, socially and environmentally conscious, and indeed, fashionable in its best sense. Bamboo-fiber drying towels, soap-free cosmetics, and chibi Buddha statues (Buddhas with comic or satirical features like enlarged heads and eyes) from Taiwan are only some of the diverse offerings for purchase alongside conventional prayer beads, singing bowls, incense, CDs and books.

The shop is better described as a hub for Buddhists and unconverted seekers alike, running activities like calligraphy and painting to vegetarian cooking. It’s a non-sectarian business: she points out the Theravada books, the Plum Village music albums, the Zen paintings. “We don’t rent out our space to Buddhist groups or other organizations – as long as they are doing things beneficial to the community, we want them to make use of this place for free,” says Cynthia, known affectionately as CC (思思). Like many modern Buddhists, she plays down her doctrinal affiliation. “As long as it’s legitimate and mainstream, any school is welcome here. But as you can see, there’s not much room,” she emphasizes apologetically as she shows me around. “We’re always moving around our wares or pushing them to the side or into our office.”

By Hong Kong standards, Han Li enjoys decently generous space. However, there’s a great deal of shifting and moving because it is almost always abuzz with visitors or guest organizations that have booked out the venue for their own use. Cynthia’s team (which includes her mother, younger brother and friends) clocks in long hours. They officially close at seven, but taking into account bookkeeping, tidying up, and communicating with clients across Asia, Cynthia ends up leaving quite often near to midnight.

The bamboo ambience, from the gentle lighting to the lilting music and the organic tea her friends kindly serve me, is welcoming and hospitable. Cynthia herself is most kind and warm, running her trade more along the lines of an open community center than a business in the heart of Wan Chai. Family, and perhaps particularly her late father, is central to Cynthia’s motivation and aspirations for Han Li. The sparkle in her eyes as she relates to me her story reflects both religious devotion and a sharp eye for commonsense business.

At first, commonsense did indeed dictate her early career; she was effectively forced into it. Cynthia didn’t see it coming herself. Growing up in Hong Kong, she had moved to Los Angeles to study psychology and marketing (the latter was at her father’s worldly insistence). The heartrending loss of her father, however, also meant losing the family’s means to support her brother’s studies. This prompted Cynthia to give up psychology and enter the marketing world to help her brother.

“My first job was handling kids’ stationery and Christian-themed products. I wasn’t satisfied with my job – at the time, I did want to do psychology – but I learned a lot and was treated very decently by my Taiwanese boss. I worked in the company for about four or five years, then my boss retired and went home, passing everything on to me.” She continued managing the business until her brother found work in Hong Kong, and it was then that family became ever more central to her working life.

It takes mettle to return to one’s hometown for the sake of one’s mother (the old-fashioned call it filial piety, I prefer to call it courage). “Honestly, I came back to Hong Kong at my mother’s behest,” she says. “I really didn’t want to come back in 2007. I had spent almost ten years in America already. I wanted mum to join me in LA, but she didn’t like the lack of a car. So I left behind everything and returned. I was able to get into advertising back here, and companies wanted the marketing and product development skills I had learned over in LA.” It was vibrant and rewarding work, but soon she began to feel unproductive and restless. There was the ironic situation of not actually having time to see her mother much at all.

“I was so busy spending time with colleagues, I was finishing as late as one or two in the morning. Dinners, meetings, The Venetian… it just went on. What was the point, I asked myself, of coming back to be with mum when I could never spend time with her?”

Looking back, this apparent misfortune might have been the catalyst for a future payoff. Without the obligations she would have had to meet in the States, like a mortgage or a car, Cynthia realized that she might as well take advantage of her entrepreneurial passion. A four-month spell with Fo Guang Shan’s Buddhist College in Hong Kong drew her into deeper admiration for Buddhism’s rich heritage and the idea of promoting modern Buddhist aesthetics. She started an online shop with t-shirts and Zen calligraphy – “simple stuff”, she recalls fondly, “but Hong Kongers aren’t used to online shopping, especially when they want to try on clothes.” She graduated from Hong Kong University’s Master of Buddhist Studies program in 2012, and enjoyed a break in 2013 after an article in the magazine Buddhist Compassion helped to ignite public attention. Suppliers across Asia began persuading her to find the physical space to store and sell bulkier items like statues. Critically, she wouldn’t need to bear the costs.

The burgeoning support from local and international buyers further strengthened her initiative and creativity. “When I realized people wanted to help me set up a place of my own, it was only natural that I tried to return such kindness. I also realized this was the perfect chance to help smaller Buddhist organizations or interested groups that can’t pay Hong Kong’s eye-watering costs of renting venues for events.” She has also been able to take in wares, like Buddhist paintings, that their owners can’t afford to put elsewhere.

“Whether I’m here or working outside of the Han Li, I can take such a heavy burden off the backs of monastics and creative people,” she says, with a conviction that combines her own strength with that of her late father. “Let them get on with the Dharma talk, or painting, or making art. Let me handle the administrative aspects: marketing, organizing. It’s been my forte. It’s how I’m giving back.”

Although it is a currently flourishing enterprise, the Han Li is still a new presence in town. Looking back, what does its founder think of her string of early successes? “All this,” she stresses, gesturing around, “is a family achievement. I’m really proud because my skeptical-minded brother and my hard-working and compassionate mother have joined me in this venture. So I can’t really say this place is still mine. It belongs to the community now.” But as far as I can see, Cynthia and her business are already perhaps creating a new face for Buddhist style and aesthetics. As Buddhism in East Asia gradually leaves behind its image problem, Cynthia’s chic can only be a most excellent advantage.